Home › Sin categoría › The World after the Industrial Revolution 3.0: Living in a Fluid and Hyper-connected Society

The World after the Industrial Revolution 3.0: Living in a Fluid and Hyper-connected Society 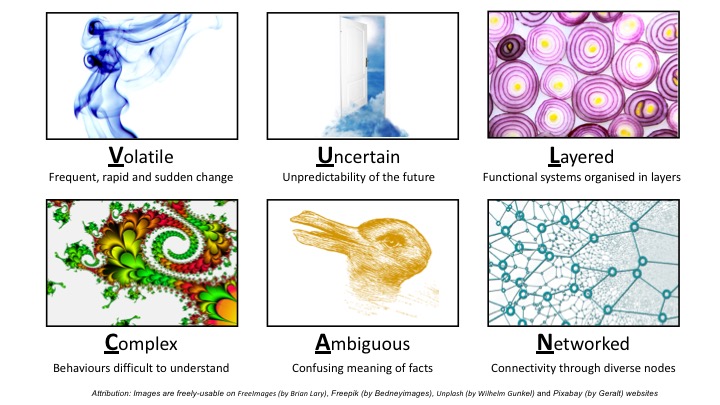 “Be Water, My VULCANian Friend”

“Everything Flows, Nothing Stands Still”

We live in change, off change, for change. We are change.

There are changes we can control, even foster. The least. We can influence others, in the best of cases. But many are given to us, we find them. The majority. Some of these ones can be suspected, so that we can anticipate and worry about preparedness for when they occur. However, others appear suddenly and unpredictably, forcing us into a swift reaction and adaptation. Let’s focus on the latter for this series of articles. If the magnitude of the change is subtle, gradual and in incremental stages, it will not demand much of us, possibly we will adapt in a natural and gradual way, almost imperceptibly and unconsciously. Only when we look back with time perspective, we will realize the transformation experienced. However, from time to time drastic and disruptive changes occur, which even lead to a total transformation of the status quo and paradigm in which we live. We return to the starting point, to zero. We have to restart the game, or rather a new game, with new rules and players. The challenge is enormous: how to survive and navigate through a storm that we have not been able to foresee? We have no alternative but resetting and reinventing ourselves.

“It is not the strongest of the species that survives, nor the most intelligent that survives. It is the one that is most adaptable to change”

The technological and scientific advances achieved since the end of the 20th century in the field of information, digitalisation and communications (known as ICT, information and communication technologies) have drastically transformed Society and our way of living and relating. We can speak of a Revolution of Accelerated and Massive Connectivity. In the Society of the Third Industrial Revolution 3.0, everything is connected and flows faster, in greater quantity, more lightly, more intelligently and at a greater distance. Everything is at your fingertips or with a click, immediately accessible. We live the almost divine illusion of ubiquity: to be present everywhere at the same time, as observers or as virtual actors. Furthermore, without having barely had time to adapt to the new modus vivendi, we are already at the dawn of the next Revolution and facing the opening of a new era, possibly the most momentous in the History of Humankind: The Revolution of Artificial Evolutionism,  the New Identity, the “Homodeism”. The “Divine Man” (the Homo Deus of Y. Harari) moving towards transhumanism and technological singularity. For the first time in Natural History, the human being defies the laws of evolution and assumes the power to modify and create new autonomous species with natural (bionic technologies and gene editing) or artificial (computing and robotics) intelligence, as well as transferring the borders of the mind and rethinking the concept of “identity”, understood as the property and privacy of thought (BCIs, brain-computer implants, neurotechnology). But let’s put aside this future scenario that awaits us for the moment and let’s stop at the present moment.

Trying to describe the characteristics of this new current environment, the acronym VUCA has been adopted, stemming from the initials of the terms Volatile, Uncertain, Complex and Ambiguous. Originally created in the military field after the end of the Cold War, its application has been very pertinently extended to the strategic analysis of the behaviour of individuals, social groups and business organisations in the contemporary world. In order to make the description more precise, I propose to add two new attributes to these four elements: Layered and Networked. Conveniently mixing the six elements, the acronym would evolve to VULCAN:

Attribution: Images are freely-usable on FreeImages (by Brian Lary), Freepik (by Bedneyimages), Unplash (by Wilhelm Gunkel) and Pixabay (by Geralt) websites

This new scenario implies the liquefaction or sublimation of the past world prior to the ICT Revolution of Connectivity to give way to a new paradigm that the philosopher Zygmunt Bauman has metaphorically called “Liquid Modernity”. The new society that has emerged in the modern VULCAN environment is a Liquid Society subject to continuous and irreversible changes. In contrast, the past world and society were “solid”, that is, sustained in tangible realities, more predictable and controllable, programmable, more stable. Standardised procedures, norms, absolute values, repetition, customs, people groups were their rules of the game and scope of action. However, this made them too reluctant to external change and internal mutability, slow of movement, prone to involution and with limited capacity for renewal. A “Dinosaur Society”.

Interestingly, this dichotomy has also been used recently to describe differences between cognitive networks with the ability to exchange, store and process information. This is how we speak of “solid brains”, those in which there is a well-defined and persistent physical structure of elements and connections (e.g. brain neuronal networks or in silico microprocessors), and “liquid brains”,in which the connections are not stable and the elements are dynamic and can even move in space (e.g. colonies of ants and termites, the immune system or some microbiomes). These latter systems are highly adaptable and nimble, can solve complex problems, exhibit learning and memory and make decisions in response to environmental conditions.

Modern Liquid Societies, or better yet “Fluid Societies”, are characterised by five essential attributes of the entities that compose them and that are specific to the physical nature of fluids, either liquid or gaseous:

Paraphrasing Bauman, the identities of this new liquid modernity are similar to the crust of a volcanic lava tube that hardens, melts again, and constantly changes shape, before they have time to cool down and set. From the outside they may appear stable and solid, but inside they are constantly fragile and torn by their surroundings.

Nowadays solid and fluid societies and organisations coexist, with different degrees of fluidity, or even mixed, where each typology is applied according to the functionality, operation and idiosyncrasy of each individual element or unit that makes up the whole. There is no good or bad model in itself, but well or badly adapted to the circumstances. This is the case in business organizations. Those based on mass production through assembly lines and use of electricity (model of the second industrial revolution 2.0: ExxonMobil, Coca Cola and General Electric) are constituted mainly as solid organisations, whereas emerging and disruptive ICT companies (model of the third industrial revolution 3.0: Facebook, Alphabet/Google) preferably adopt the liquid or fluid company model. Companies that carry out innovation and production at the same time, such as those of renewable energies, ICT devices or pharmaceuticals, may well combine both cultures. For the sake of business efficiency and success, companies must align their culture, processes and organisation of people to the market, to the nature of their resources and to their financial structure. However, there is an inertia in which business organisations continue to be structured according to schemes derived from the linear and sequential way of producing and operating prior to the ICT Revolution, that is, compartmentalised models with a pyramidal hierarchy. And it is that we are naturally resistant to promoting change, both because of the insecurity it generates in us, and because of the inability to manage it efficiently (NOTE: Change Management is a widely developed management methodology, which we will be able to deal with in future chapters).

At this point, let me make a couple of observations that may be of interest. If we take as an indicator the evolution of the stock market index during periods of sudden crisis, such as the one caused by the COVID-19 pandemic in early 2020 (see figure), it is noticed the greater vulnerability of solid organisations (included in the Dow Jones Industrial, DJI) due to the distrust of investors and their lower capacity to react compared to those ones which are more liquid and based on modern innovation, technology and knowledge (included in the NASDAQ, despite some of the most capitalised companies are also listed on the DJI). Time will tell if it is a sustained effect or a speculative bubble. In 2018, General Electric (GE) was removed from the Dow Jones index after 111 years trading on the index and having been the company with the highest stock market value in the world and a symbol of US industrial power during the 20th century (“forewarned is forearmed”).

In summary, the 3.0 technological revolution of Connectivity has caused the emergence of a new scenario, which we have described as VULCAN, and the paradigm shift to a modernity where Society has become fluid. The identities of this modernity, whether individuals, human groups or business organisations, face the enormous challenge of adaptability to a new environment and game rules. The question is how to do it. Are there guidelines to avoid leaving the success of such a process of change to the whim of randomness, luck or chance, in order to not only survive, but even emerge stronger?

In the following articles we will elaborate further on the topic of Complexity Management in modern innovative organizations. We will intend to:

I invite you to embark on this journey that we will do together.

For the moment, I leave you with the Taoist advice of our friend Mr. Bruce Spock-Lee: “Be Water, My VULCANian Friend”. You don’t have to use force to fight force, it is better to be like water and let the blow flow over your opponent.

“The Grand VULCANIAN Challenge: Planning the Uncertainty and Sustaining the Change”

“Understanding the Simplicity of Complexity: the Chaos Theory”